Elon Musk ignited the environmental impact debate surrounding Bitcoin mining, which took a toll on the price of cryptocurrencies. In a controversial tweet, Musk stated that the EV company would end vehicle purchases via Bitcoin. He cited his concerns for the “rapidly increasing use of fossil fuels for Bitcoin mining and transactions, especially coal, which has the worst emissions of any fuel.” His comments have opened Pandora’s box inside and outside of the cryptocurrency community, with Bitcoin bulls like Anthony Pompliano defending Bitcoin’s energy consumption.

If you are a socially responsible investor wondering what it could mean for your Bitcoin IRA, chances are you’re not alone. However, Bitcoin mining appears to have the potential to give more back to the planet than it consumes, based on a roundup of expert commentary. Some of Bitcoin’s key attributes include:

Bitcoin uses a Proof-of-Work (PoW) consensus algorithm to validate transactions on the blockchain. This process helps verify transactions and has three components:

While it’s no secret that Bitcoin mining, the software-powered process by which new Bitcoins are minted, is an energy-intensive process, its efficiency comes down to perspective. For example, ARK Investment Management points out that Bitcoin’s energy needs to fall 10% below the consumption of the legacy banking system that is at odds with cryptocurrencies. Bitcoin’s market cap has seen rapid growth as it touched more than 1 trillion dollars this year, while BTC bulls like MicroStrategy’s CEO, Michael Saylor, predicts its market cap could be headed for 100 trillion dollars.

ARK makes the case for Bitcoin mining serving as a bridge between renewable energy generation for sources such as wind and solar, as well as storage. The idea is that while the cost for producing energy from renewable sources like wind and solar already falls below that of fossil fuel-powered energy, it is more difficult to capture and store this energy. You can’t control when the sun shines or when the wind blows, for example. The intermittency at which renewable energy is available is characterized as what’s known as a “duck curve,” and this is where Bitcoin comes in.

Square and ARK suggest that adding Bitcoin miners and their nimble load to the renewable energy equation to create a green grid enhances the value proposition for renewables, versus producing and storing it in isolation. In essence, it becomes a potentially virtuous cycle in which Bitcoin miners become buyers of renewable energy, which in turn fuels demand for more green energy generation, thereby lowering the costs even more and attracting more Bitcoin miners to renewable sources of power.

Considering that Bitcoin miners need consistent energy, this concept could be the perfect conduit for consuming what intermittent energy is left in what ARK describes as the “duck’s belly.” The result, ARK suggests, is that renewable projects will become more profitable, which could potentially bolster returns for investors and miners alike.

Meanwhile, tech entrepreneur Jack Dorsey took the green energy debate a step further, arguing that “Bitcoin incentivizes renewable energy,” which incidentally is something that Elon Musk agreed with not too long ago. 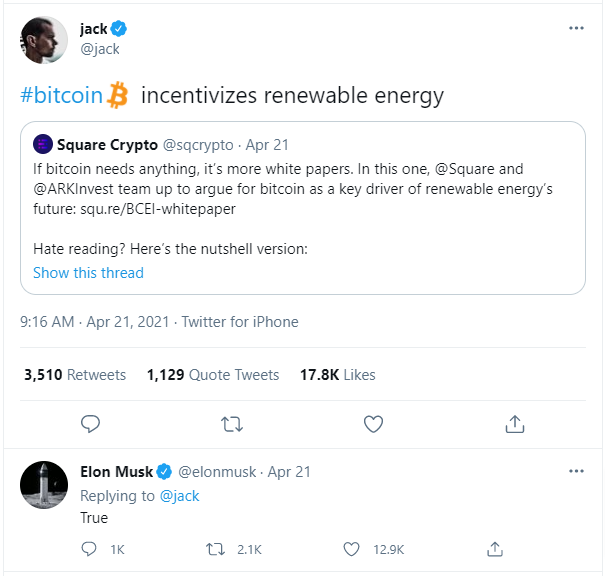 Billionaire Mark Cuban offers a different take. The Dallas Mavericks owner responded to Musk in a tweet, saying that his NBA team will still accept BTC as payment for team merchandise and tickets because “replacing gold as a store of value will help the environment.” 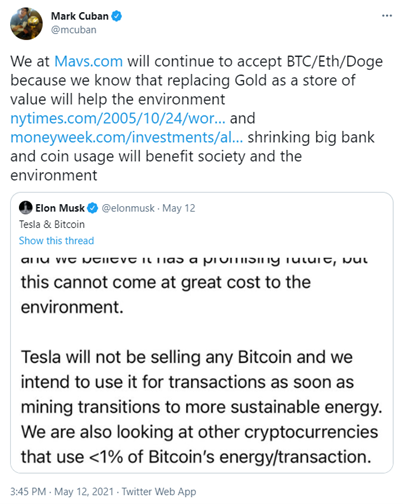 Despite the recent drop in Bitcoin’s price partly due to Elon Musk’s tweets, the digital asset is still up over 40% this year as of May 27, 2021. With increased attention surrounding cryptocurrencies, you may be wondering the best way to gain exposure to the market.

Setting up a crypto IRA could be one of the best ways to take advantage of cryptos. Leaders in the cryptocurrency industry maintain that it’s early innings for crypto. Given the pace at which the market has received support and trust from institutions like Ark and Square, consider opening a Bitcoin IRA sooner than later.

Recommended article: How To Buy Crypto with a Bitcoin Roth IRA

The post Bitcoin: Is It Actually Bad For The Environment? appeared first on Bitcoin IRA | Official Bitcoin Retirement Account Investment.