Its price chart is similar to that of Shiba Inu, another popular meme coin. SHIB has had a slightly higher price rally since its 2022 bottom.

After price dumped from the top in May 2021 it found strong support on the 0.382 Fibonacci retracement level, as the wick of the weekly candle was front-run there and closed back above the 0.618 Fib level.

However the next weekly candle closed below the 0.382 Fib at which many investors would’ve sold. Since then the weekly closes have marked successive lower highs (LH), a bearish market structure.

The short-term bullish case for Dogecoin is that last week it put in a bullish engulfing weekly candle and is currently green this week. The 0.236 Fib is also yet to put in a strong rejection as the last time it was tested price managed to close several weekly candles above it.

Even if Dogecoin’s bear market is not over and it will set new lows, it may retest the 0.236 Fib again to put it a fourth lower high just below it. That would be a 50% price gain from its current point.

Dogecoin price action is very volatile and that kind of 50% move is entirely possible especially as Bitcoin has reclaimed $45,000 and Ethereum $3,200.

Another Elon Musk tweet promoting Dogecoin could also spark that kind of pump. His last tweet about the meme token was in Jan 2022, confirming that Tesla would accept DOGE as a form of payment for merchandise.

DOGE could even wick to as high as $0.30, double its current price, and still have a bearish market structure if it closes weekly candles around $0.25 to put in another lower high.

A conservative investor would wait until the DOGE price reclaims the 0.382 Fib, an important pivot which historically rejected the price several times, and closed a weekly candle above it, i.e. at $0.36 or higher.

That would break the current bearish market structure and not leave much resistance between it and a retest of the previous top. No monthly candle has ever closed above $0.36, and very little price history exists above that.

A retest of ATH from there would be an over 100% gain and a breakout into price discovery and new all-time highs could result in a further move to the 1.618 Fib extension, just over $1.

The most optimistic Dogecoin community holders often ask ‘will Dogecoin reach $1’, suggesting they are not prepared to sell until then. So just before $1 could be a good take profit point if the Dogecoin bull market resumes.

If there will be another DOGE bull cycle, it could occur around the next Bitcoin halving which is in 2024. Although if relying on an increase in the Bitcoin price to raise the price of Dogecoin, it could be argued that it is a safer investment to simply hold Bitcoin.

Currently the DOGE / BTC pair shows no signs of breaking out of its nine month downtrend. 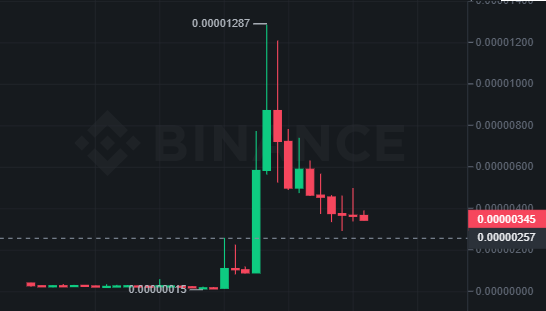 There is little support on the chart above and still a 25% gap that may be filled between the current DOGE/BTC point and its previous high.

One mistake crypto investors make is to become a ‘bagholder’, i.e. continue holding rather than realise a loss.

This strategy historically has worked in the stock market, and for holders of the largest cryptocurrency Bitcoin, however some altcoins take years for recover or never do – the opportunity cost of being left ‘holding the bag’ is high as you could recoup your investment faster by selling and buying an altcoin that is in a strong uptrend.

See our recent recommendations for the best cryptos to buy in 2022 and the best low priced cryptocurrencies.

If you are already invested in DOGE, you could set a stoploss under the current low of $0.12 and move onto a different coin if stopped out. You could also add to your position at these low prices to bring your average entry to under the 0.236 Fib (ideally under $0.25) then exit there at breakeven, or reduce your position size.

Dollar cost averaging (DCA) in this way is a good way to limit risk – always preserve your capital, keeping some cash aside to buy the dip in situations like this. Don’t go ‘all in’ on one crypto asset.

Your capital is at risk.